TOP 10 MOST POPULATED CITIES IN AFRICA

The top 10 most populated cities in Africa in 2015 is a very interesting list. This is so because Africa is the world’s second-largest and second-most-populous continent. With 1.5 billion people as of recent estimate in 2015 , it accounts for about 20% of the world’s human population. although this  population is dispersed randomly across the continent. this list brings out  the recent estimate for 2015.

Casablanca is a port city and commercial hub in western Morocco, fronting the Atlantic Ocean. The city’s French colonial legacy is seen in its downtown Mauresque architecture, a blend of Moorish style and European art deco. it has a population of 3.5 million people

Nairobi is the capital and largest city of Kenya.. it was founded in 1899 by the colonial authorities in British East Africa, as a rail depot on the Uganda Railway.Nairobi is one of the most prominent cities in Africa, both politically and financially, current estimate from the 2011population census put Nairobi at 3.8million.

Cape Town is the second-most populous city in South Africa behind Johannesburg and it is the provincial capital of the Western Cape. Located on the shore of Table Bay, Cape Town is famous around the world for its beautiful harbor and it has a long history going back to its development by the Dutch East India Company for supplying ships in the mid-17th century. estimates in 2015 put Cape Town as having a population of 4 million.

Abidjan is the economic capital of Ivory Coast and is the most populated West African French-speaking city. Its population at the 2014 Census was 4,707,404, which is 20% of the overall population of the country.

Addis ababa, Capital of Ethiopia once termed as Africa’s fastest growing economy is the 6th most populated cities in Africa boasting a population of over 4.5million with expert forecast putting it at 8.1 million by 2040,

Giza is a plateau southwest of modern Cairo which served as the necropolis for the royalty of the Old Kingdom of Egypt. Most famous for the pyramids of Egypt. its estimated population of 7.4 million puts it at the 7th position.

Kinshasa is often considered the second largest francophone city in the world after Paris. its the capital and largest city of the Democratic Republic of the Congo, is in the west of the country along the south bank of the Congo River. the population of Kinshasa is 12 million.

Cairo is the largest city in Egypt and the country’s capital and it is located close to the Nile Delta. With a history dating back to CE 969, Cairo blends old-world and new-world Egypt. It is often referred to as Masr by Egyptians, which is the Egyptian Arabic pronunciation of Egypt, as well as al-Qahirah (“the Vanquisher”), Kayro or Umm al-Dunya (“the mother of the world”).

Cairo has an estimated 2015 population of 13 million,

Lagos is a port and the most populous city in Nigeria. The metropolitan area originated on islands, including Lagos Island, that were protected from the Atlantic Ocean by sand spits. The city has expanded onto the mainland west of the lagoon, however, with Ikeja, the capital of Lagos, and Agege over 25 miles northwest of Lagos Island. Lagos has a population estimated at 21 million in 2014, which makes it the largest city in Africa. 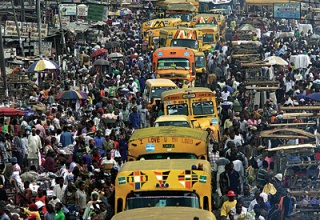